The Intermittent inductive automatic train stop system in service on two former Chicago Northwestern commuter lines was taken out of service on October 19th, 2019.  UP/Metra received FRA permission to abandon the system due it being generally rendered unnecessary through the deployment of PTC.   Known for its distinctive "upside-down canoe" track mounted inductors, the IIATS system was developed by General Railway Signal in the 1920's and at its peak covered thousands of miles of main line track with the New York Central, Southern and Santa Fe being the most prominent users with the system supporting high speed operation after the ICC 80mph regulation came into effect in 1948.

Although the Central and Southern dropped the system in the 1970's, the Chicago Northwestern installed ATS on the North line to Kenosha in 1952 and the Northwest line to Harvard in 1967.  The system provides a in cab alert if the train passes a signal displaying an indication other than Clear, which the engineer must acknowledge.  Although the system is no longer is service, removing the inductors has not been a priority and there was likely no alterations made to any signal logic as the greatest operational impact of ATS is the pickup shoe mounted to the leading truck of the locomotive or cab car.  The ATS shoe must be properly gauged to prevent false activation or damage as well as tested like any other technical safety system.  The immediate result of the October 2019 retirement was the removal of equipment mounted ATS shoes with the track mounted inductors slated for removal over time. 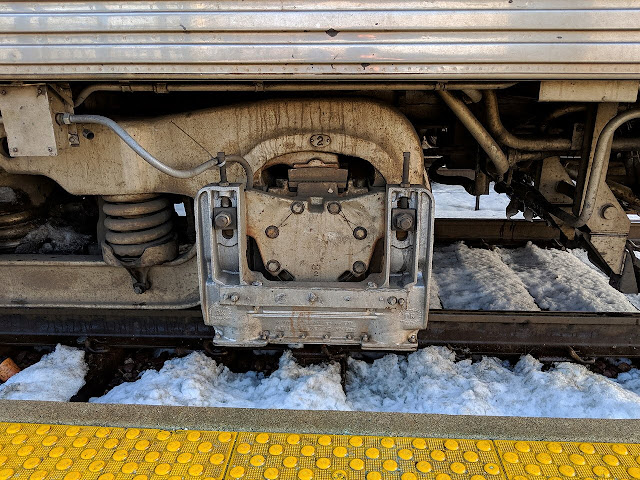 This means that there is still a window of time for fans to get out there and document the trackside component of the ATS system as installed by the CNW, especially on the Northwest line with its three track arrangement on the UP Harvard Sub.  At this point ATS is still in service on portions the former Santa Fe "Chief" transcontinental route between Chicago and LA, the Surfliner route between Fullerton and San Diego and the New Jersey Transit RiverLINE where it functions as a positive stop enforcement device at interlockings.  Currently UP is undergoing a dispute with METRA over operation of the former CNW commuter routes with UP looking to offload responsibility.  As the North and Northwest lines see minimal freight traffic, an outright sale to METRA could keep the inductors in place for many years to come.  The Southwest Chief route in New Mexico, Colorado and Kansas has the ATS system "out of service" for over a decade, but the equipment left in place due to general disinvestment in the line.

Left unresolved is the fate of the CNW Automatic Train Control two aspect cab signal system.  Although targeted for retirement by PTC, continuous cab signal systems have proven to be a more reliable form of wayside to train communication and the FRA is still generally in favor of ATC as a PTC supplement.  Union Pacific with its extensive network of traditionally cab signaled track, may look to convert the CNW system or keep it in place as the differences can be ultimately handled in software.