Switch Position Indicators are to railroad signals as Uber is to a taxi.  It serves basically the same purpose, but without the high cost and pesky regulation.  Switch Position Indicators (SPI) are exactly what they say on the tin, indicators (I'm focusing on the illuminated ones here) that indicate the position of an attached switch, either normal or reverse.  As they are not part of an interlocking, the SPI is typically mounted on or near the switch and broadcasts its indication in both directions simultaneously. The typical colors are green for normal and yellow for reverse.  Red is not typically employed since switches SPIs are attached to are usually trailable so there is indeed no wrong way to go through them. 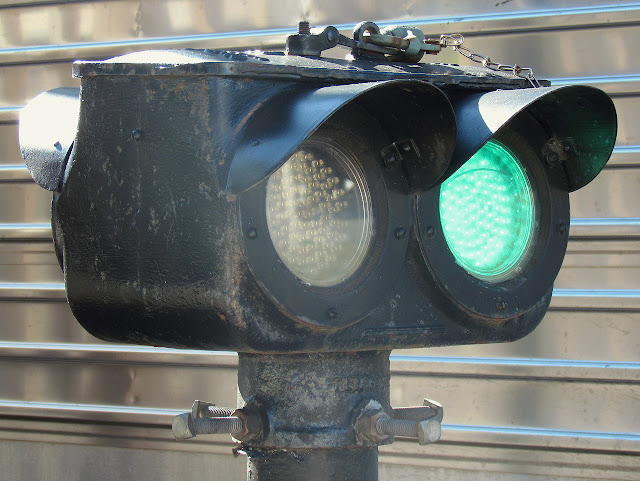 Here we see an old US&S ES series SPI modified with LED lamps.  Previously centrally mounted electric bulbs would have shown through in each direction.  Out on the main lines, hand throw or spring switches would be fitted with kerosene lanterns that would be mechanically rotated 90 degrees to indicate the switch position.  These were eventually replaced by reflective "flags", also mechanically rotated in accordance with switch position, but I am focusing on the electric variety. 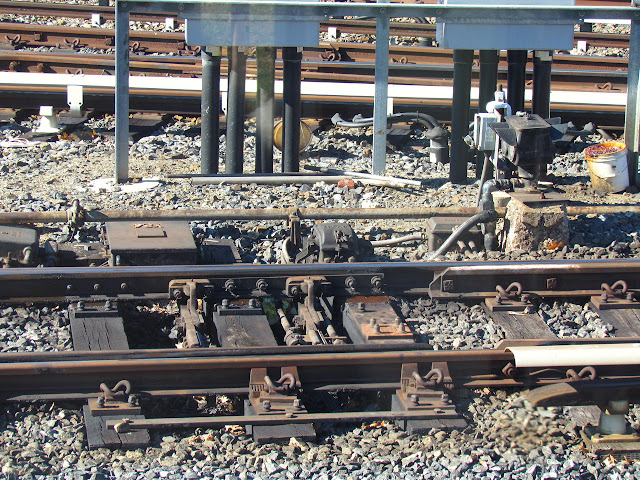 Electric SPI's like these were typically found in yards attached to trainable point machines with the SPI's indication being determined by a separate circuit controller.  If the switch points were on center, not valid for either route, the SPI would remain dark. 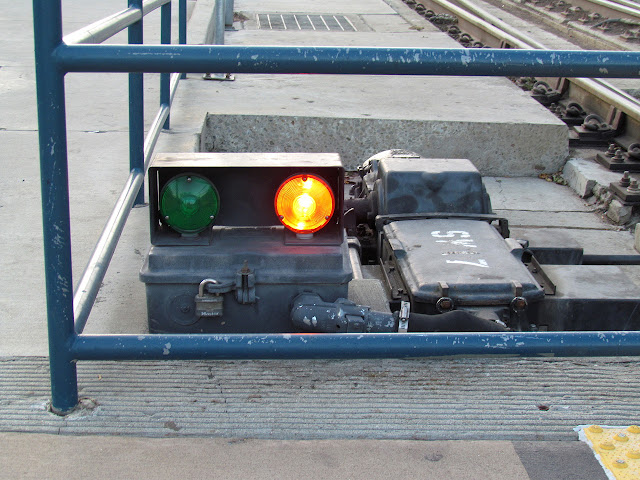 Here is a clearly lower quality GRS supplied SPI with plastic lollipop lamps indicating a reverse switch position.  This one is in light rail use and is attached to a standard GRS Model 5F point machine.  This switch is in use on the VTA light rail line and is actuated by the LRV's themselves via a transponder system. 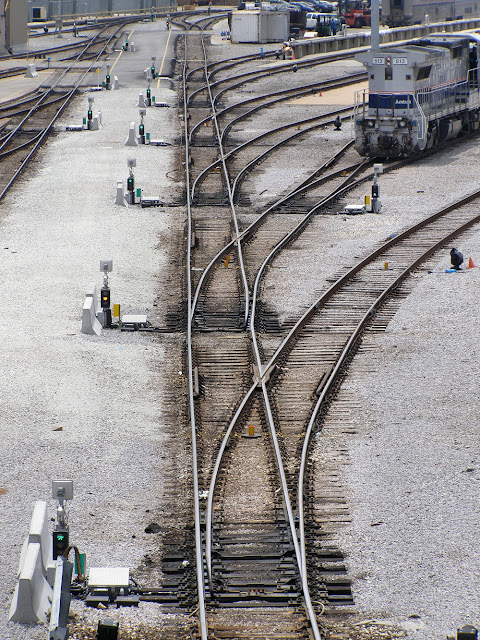 Here we see a typical yard ladder setup with remote controlled switches and SPIs.  The apparent cheesiness of the indicators steps from the fact that they are not considered safety critical devices like normal railroad signals and don't have to be weather resistant, fail safe, etc. 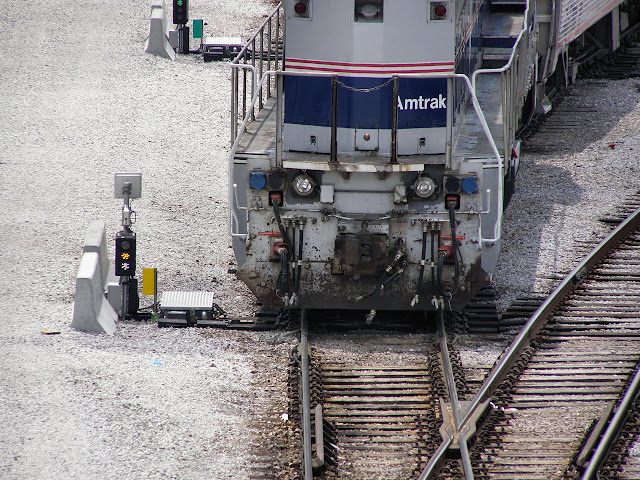 Now just because trains are moving at restricted speed doesn't mean that one can just shrug off derailments.  These units at Amtrak's Lumber St Yard in Chicago have a special third, lunar white, lamps that illuminates when something is over the switch and the points are locked.  I am not exactly sure of the mechanism that detects when a train is over the points (track circuit, treadle, inductive sensor) , but it appeared to work.

Outside of yards, spring switches were one of the earliest applications of SPIs on main line track.  Popular on pre-CTC single track lines, spring switches eliminated the need for trains to have to re-line siding switches for the main and in certain applications eliminated any need to stop and throw at passing points all together.  However where such lines lacked ABS signals to protect against misaligned points, SPIs were the answer, giving oncoming trains moving at above Restricted speed assurance they weren't about to careen into a siding. Lately, railroads are getting increasingly bold with their use of indicators on unsignaled secondary tracks.  Non-interlocked junctions might require sizable freight trains to have to stop and line a switch, possibly multiple times as cars are set out or backup moves made.  Not to mention the hassle of having to wait for a member of the crew to walk to train after restoring a hand throw switch.  Equipped with radio or transponder controlled switch machines just as we saw on the line rail line, these non-interlocked power switches are being fitted with a slightly higher class of SPI.  This example makes use of a standard Darth Vader type signal head with modified lamps showing normal, reverse and on-center positions.  As you can clearly see, SPIs do not convey block information. Here we have perhaps the pinnacle of SPI craziness, a full crossover with M23 point machines protected by a full past SPI .  As with BNSF above, CSX  has sought to differentiate their signal-like SPIs from regular signals.  Their method is to use CNW style horizontally mounted signal heads.  This practice has been picked up by a few other roads while another popular method is to use ovoid signal heads with the cheap style signals seen in the Amtrak photos.

That's it for today.  This wasn't meant to be anything really in depth, just a little heads up for when non-interlocked interlockings appear on a rail line near you.