Well, once again I put my hand up to do a program for an NRHS Chapter meeting and since it was for Philly Chapter instead of West Jersey I was able to partly re-cycle my 2008 presentation on Pennsylvania Railroad Interlocking towers on Amtrak's Harrisburg Line.  Of course back in 2008 ZOO, OVERBROOK, PAOLI, THORN, PARK, LEAMAN, CORK and STATE was not only open, but relatively intact.  Fast forward 14 years and only THORN, PAOLI, OVERBROOK and ZOO remain with the first two clearly on their way out.

My plan was to refresh the presentation with the updates and refreshed photographic content (including from my 2019 THORN visit).  The reality was that the quality of my 2008-edited photos was woefully inadequate and it took me a good 5 hours to get everything up to snuff. To avoid any awkward dead air I preformed a two hour practice session on my live stream and that is what I am now able to present to you.  There are a few hiccups here and there, but overall I am happy with the result.

Ironically the live chapter presentation had to be split into two parts because a number of Philly chapter members take SEPTA to the meetings which limits the duration to an hour. 🙄

Posted by Jersey Mike at 3:33 PM No comments:

CSX's habit of spinning off less profitable subdivisions to short line operators has created another signaling museum, this time in the state of Florida. Similar as to how the Lake State railroad has preserved about 130 miles of C&O era signaling and 1950's vintage code line CTC, the Florida Gulf & Atlantic Railroad has preserved about 250 miles of Seaboard signaling on the former CSX Tallahassee Sub between Baldwin, FL and Tallahassee, FL, where the line becomes DCS controlled. The lease took effect in 2019 and after three years of operation there is so far no indication that the new tenant has any plans to upgrade the signaling.  Not only would it not benefit them financially, but as a Class III operator they are exempt from the PTC requirement.

The Tallahassee sub signaling museum is important because of CSX's effectiveness in eradicating the seaboard signaling on its S and A lines running between Richmond and Miami/Tampa as well as secondary routes such as the Abbeville Sub.  Despite using Seaboard Style (duh) Color Lights and in some cases 1980's vintage US&S elephant ear signals, CSX was relentless in its modernization efforts.  In the above street view at SE LIVE OAK we can see a US&S TR type target signal with a large type backing that was preferred by the seaboard.  The signal is in a poor man's siding exit bracket with a dwarf adjacent to the mast with a doll arm. All in all the subdivision hosts 29 controlled sidings with 32 interlockings and a large number of intermediate signals between them.  Definitely worth checking out if one happens to be on the I-10 corridor in northern Florida.

With the fate of UP's Automatic Cab Signal system unclear, I found what appear to be 1980's ACS training videos on Youtube.  The first discusses basic use of the system and the second inadvertent activation in non-cab signal territory. Interesting takeaways is the use of heavy cast iron control and display boxes on board the locomotive as I assume Union Switch and Signal had no capacity to work in plastics or sheet metal 😏

The cab signal "hits" video is interesting as since UP uses a 60hz code carrier, mains current that enters the rails could trigger such an event on any equipped locomotive, anywhere on the system and if the crew isn't on the ball the activation could result in a penalty brake application.

Email ThisBlogThis!Share to TwitterShare to FacebookShare to Pinterest
Labels: cab signals, UP, video

After some initial reports back in early March, it has been more extensively reported since the Russian withdraw from the northern from that Belorussian railway workers and anti-Russian activists had been conducting extensive sabotage operations on Russian supply trains transiting their county with specific focus on the signal system as a method of causing delays without causing death or injury.

In a previous post covering the nature of ex-Soviet railway signaling I mentioned that the rail network uses a very strongly "station based" interlocking system.  This means that most major stations (think any large community with more than 1000 residents or so) will have crossovers and multiple siding tracks as well as industrial leads and possible junctions.  Between these station interlockings are simple automatic block signals, either single or bi-directional.  The following Belorussian cab ride video shows off the system well along with what appears to be a voice enunciated cab signal system?

Anyway, most of the articles implied that the signal attacks were occurring against undefended ABS signal locations away from prying eyes.  While this would certainly cause some delays, the simple nature of the signaling involved could likely be repaired quickly or worked around with absolute block operation.  The juicer targets of interlocking relay rooms appear to be a much tougher nut to crack as unlike North American interlockings, the location of the central instrument houses is hard to determine as they are not obvious from the cab.  This implies they are in the station or one of the station's outbuildings, which would be far harder to sabotage due to the presence of the public, security personnel, railway staff or CCTV monitoring. The article even goes on to say that the attacks became harder to pull off as local security forces were put on notice.

Because of the old school nature of the signaling, most of the setup would be immune from cyberattacks with the possible exception of any CTC system that might use computer aided dispatch or public networks for communication.

Posted by Jersey Mike at 9:10 PM No comments:

Although The PATH has stood up a CBTC solution to increase capacity and fulfill its PTC requirement as a railroad, they still maintain a reserve system of wayside equipment that follows their historic pattern of signaling and moreover the PATH remains committed to the use of pneumatic point machines and trip stops.  The Path Guy captured this newly installed US&S pneumatic trip stop at Journal Square that was supporting a platform extension project. The PATH is likely the last operator to continue to install this type of equipment. 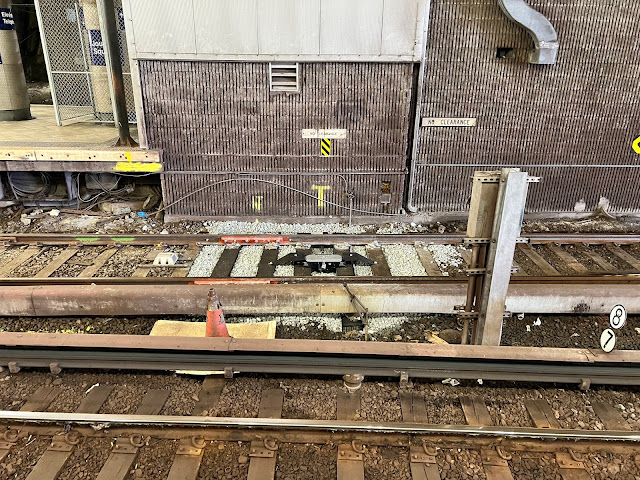 Posted by Jersey Mike at 9:33 PM No comments:

My 2022 road trip up the Hudson River valley uncovered several more newsworthy elements than I had encountered in 2021.  The first and foremost of these is that Amtrak has likely completed its refresh of signaling at Hudson Line interlockings with the anticipation of eventual Rule 562 operation.  Although no 'C lamps have been fitted, the Conrail era searchlight signals have been replaced by Safetran modules LED target signals.  At CP-103 these are in new masts at the same location and at CP-114 they have been mounted on the legacy tubular cantilever masts.  In 2021 footings for new signals were in place at CP-94, likely spelling the doom of the bracket mast there. I do not have information about the signals at CP-124 or CP-125.

At intermediate signal locations the searchlights are still in place and little/no work has been started to install solid state "signal indication point" huts. 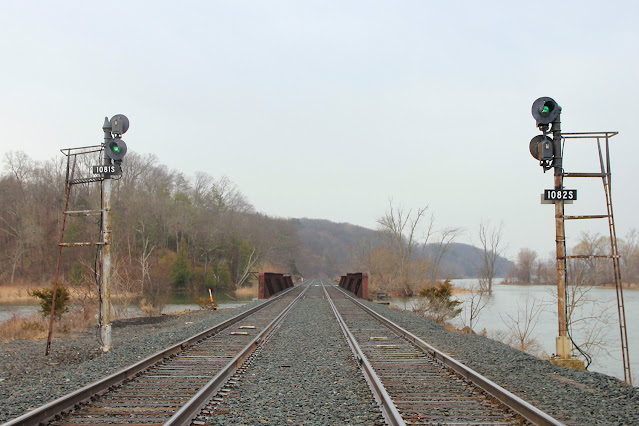 In the Mechanicville, NY area, the last gasp of Canadian searchlights are still in place at CPF-470 and adjacent interlockings.  These use a custom housing to hold what are probably railroad-stock searchlight mechanisms.

I also noticed that the entrance signals to the former Boston and Main / Guilford Rail System Freight Main Line at CPF-467 was protected by GE branded signal heads that were a thing due to their takeover of Harmon Electronics. This is fitting given GE's presence in the area. 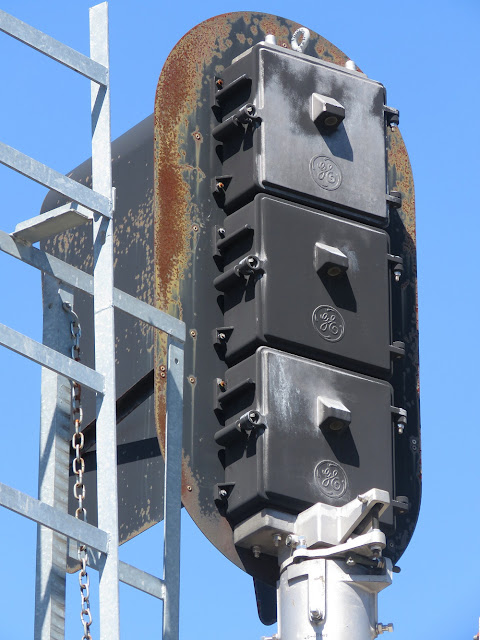 The former NY Central XO tower in Mechanicville has been taken over by the local Chamber of Commerce and someone is building a model railroad layout in the former opeator's level. 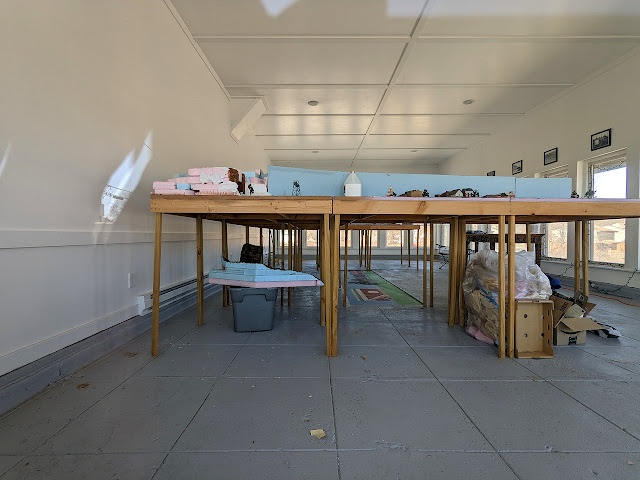 Finally I can confirm that the ancient searchlight mast on the former D&H Colonie Sub in Cohoes, NY has been replaced by a CP style Vader mast about a quarter mile to the north of the old location. 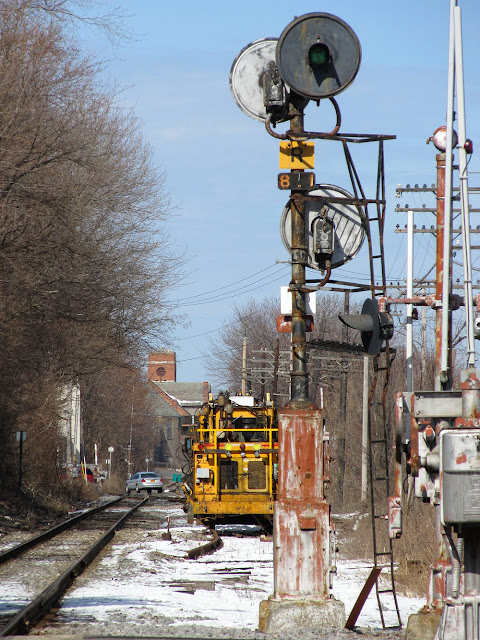 Well that's all the news from upstate.  Not great, but not terrible.

A little over a year ago I reported on the fate of WB Tower in Brunswick, Maryland.  The wooden B&O railroad tower was constructed in 1910 and closed in late 2011.  Despite plans to preserve the structure it sat empty on CSX property near the Brunswick MARC Train station for over a decade, becoming increasingly insecure and at risk of being set alight by vandals or transients. 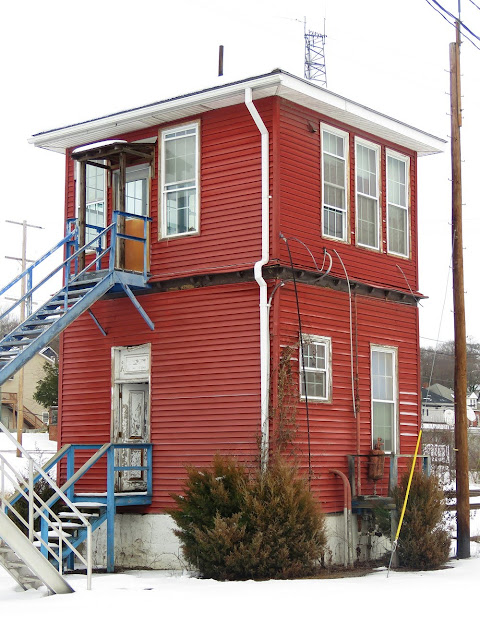 Well for once I have some good news to report.  A $15,000 state grant has allowed for the tower's relocation about 100 feet northward on city-owned property where proper restoration can take place.  It will likely be associated with the Brunswick History Museum that already hosts a number of artifacts from the tower as well as a model railroad display. While the relocation will disrupt the tower's historical context, it is a better alternative to fire or demolition.