The Last Days of COLA Tower

I just stumbled upon a Youtube video from 2015 showing video shot inside COLA tower in Columbia, PA about two months before and then again on the day of its closure on March 15, 1987.  What makes the video amazing is that it can be compared to the interior photos I took in 2020 to see the state the tower was left in and how things changed over the intervening 20 years.


Just to recap COLA was one of a few 1930's PRR electrification associated CTC projects.   The tower was open between 1938 and 1987 and then the original hardware was run via remote control until 2012.  The remote interlockings under COLA's control could have that re-routed to the Conrail dispatch office in Mt. Holly, NJ.  From the video we can see that COLA interlocking itself had a new local control panel placed in the operator's room.  I am unsure when the CTC console was removed, but from the video it appears that it was not going to remain "wired up" and by the end only the western end of the territory (JEB, SHOCKS, Etc) was still active. 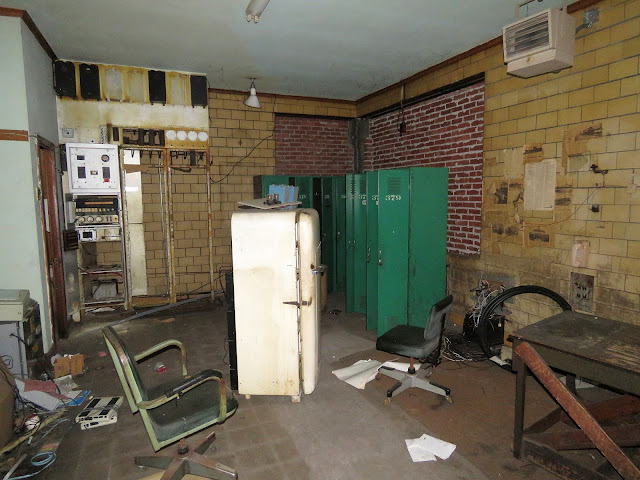 Other things that vanished include the defect detector readouts, all manner of random electronics and the 1930's vintage hanging overhead lamp.  What stayed behind?  The chairs and, the vintage Kelvinator refrigerator! It's also hard to tell if the PC green lockers were there in 1987 or brought in later to support a maintainers base. The wall behind the operator's with all the pasted up articles was obscured by a shelving unit with electronics on it, possibly in preparation for the re-signaling. In the Jan 13th video it also appears that the tower was a two person job, although there could be a number of reasons for an extra person to be on hand.

Anyway, despite frequent tower searches, Youtube still has the capacity to surprise.  It was really cool seeing how COLA's sibling tower,THORN, compares with COLA after THORN wound up with Amtrak instead of Conrail.